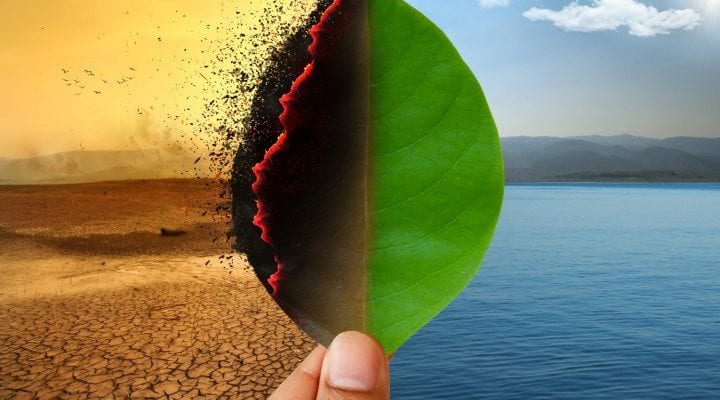 Do Humans Control the Climate? Mount St. Helens is a volcano in Washington state that captured headlines around the world in 1980 when it dramatically blew its top. It spewed vast amounts of dust and ash into the air and also released tons of trapped carbon dioxide.

Now, it’s popular today to believe that man-made CO2—carbon dioxide—emissions are causing all of the dramatic climate change.

But natural disasters like Mount St. Helens should remind us, we really don’t have control over the weather.

Although the estimates keep going up, in 2013 scientists estimated volcanos are slowly releasing six hundred million tons of carbon into the atmosphere each year. But that’s only from sampling a small number of volcanos and doesn’t include so-called dormant volcanos, which they now believe are also releasing carbon! So that figure will likely continue to go up as scientists do more research. And if there’s an eruption—watch out! It causes a change in the climate, leading to a cooling trend from aerosols trapped for years in the atmosphere.

The climate change debate is really about different views of the past.

If you believe the earth is millions of years old, and the ice sheets in Greenland and Antarctica preserve a record of the climate stretching back hundreds of thousands of years, you’ll have a very different view on manmade climate change than someone with a different view of history.

You see, when we start with the Bible’s history, we know there was a perfect climate in the beginning, marred by sin. That there was a global Flood that radically changed the planet—including our climate. This Flood was accompanied by intense volcanism, which would’ve released vast amounts of CO2, as well as aerosols, into the atmosphere. Those trapped aerosols led to global cooling and, eventually, the Ice Age.

There’s been radical climate change in the past and humans had everything to do with it… because of our sin! The sin of Adam cursed the perfect world and perfect climate, and then the wickedness of mankind at the time of Noah brought about a global catastrophic climate event.

I’m David Rives…Truly, the heavens declare the glory of God.

Check out this pack featuring the BRAND NEW book “The Ice Age and Climate Change – A Creation Perspective” by Dr. Jake Hebert along with our video titled “Secrets of the Ice Age” with Dr. Tim Clarey.

SECRETS OF THE ICE AGE DVD

How do we handle the Ice Age as Christians? Did it really happen? How would this event fit into a biblical timeline? Was there an ice age filled with strange creatures and lots of ice? An age of woolly mammoths and saber-toothed cats? If so, how would this work? What would create an ice age? Learn answers in Secrets Of The Ice Age Video.

THE ICE AGE AND CLIMATE CHANGE – A CREATION PERSPECTIVE BOOK

In recent years, Christians have become more alarmed over climate change. Both secular and Christian voices have urged them to heed the “all-but-unanimous scientific consensus” on the issue.

But is that consensus based on solid science? What is the evidence that climatologists use to reach their conclusions? And do we really need to take drastic action to stave off impending disaster?