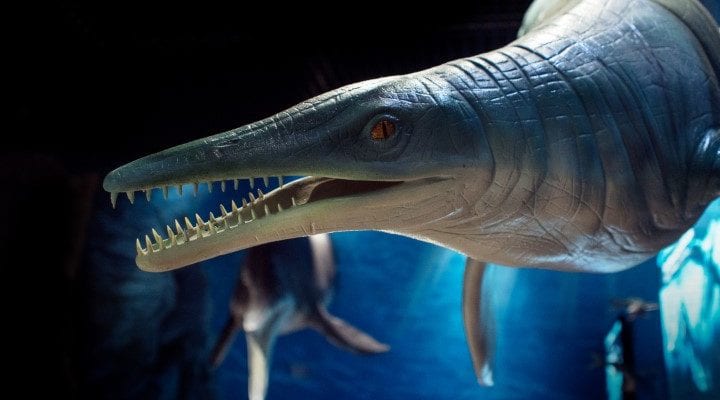 Isaiah 27:1 speaks of a dragon that lives in the sea named Leviathan. In Job 41, we read a bit more detail: “Canst thou draw out leviathan with an hook?… None is so fierce that dare stir him up… His breath kindleth coals, and a flame goeth out of his mouth.”

However, with this last statement, some immediately dismiss the account. They say “That’s fantasy. A fire-breathing dragon is only a fairy tale.” Is the Bible just a collection of myths? There’s nothing close to this animal alive today. So, does the Bible know best? Let’s look at another incredible creature… this one is not extinct… The Bombardier Beetle.

It has three chambers inside its abdomen. Two of the chambers contain different chemical compounds. When the beetle is threatened, it releases these into a third chamber and mixes with a catalyst, causing a chemical reaction to take place and a scalding spray to eject towards the attacker.

Interesting to note that the beetle wouldn’t have benefited at all from having just the compounds without the ejector system. Nor would it have functioned should the catalyst have been missing. In fact, you’d have just had a defenseless beetle. But all of the components are there in the correct order.

Two compounds, a catalyst, separating chambers, a firing mechanism and a directing nozzle. With a similar design, leviathan may have only needed one additional component: An igniter system as flammable chemicals were expelled, and a fire-breathing dragon is not AT ALL beyond the realm of possibility.

Now through Thursday, February 18th get either of the featured DVD titles below at 30% off regular price and learn more about the incredible design by God in the Bombardier Beetle and the elusive creature referred to in the Bible as Leviathan.

In, Bible Knows Best Hidden Gems of Astounding Science and Good Advice in the Scriptures Video, David Rives reveals the unfathomable grandeur of the Universe.