Bone Patterns – The remarkable symmetry of our bodies reveals analogies that will challenge the theories of evolution. 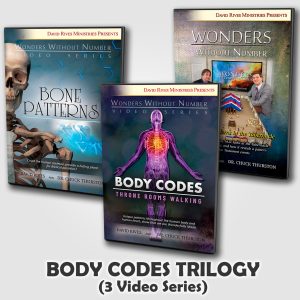 As seen on TV, these DVDs have aired on GSN – Genesis Science Network. This content was also the basis for several episodes of “Creation in the 21st Century with David Rives” on TBN. It is not the program that aired, but the official Videos on which the shows were based.

Could the human skeleton provide a hiding place for Biblical parables? David Rives and Dr. Chuck Thurston talk about parables to scripture hidden in the human bone structure. Do you even know how many ribs you have? Don’t worry, you’ll find out! You’ll also find out about the sword upon which they converge. Remember those strange verses in Revelation about “the sword of my mouth”? Perhaps it’s not so strange once we look at the human skeleton. Intrigued yet? We’re just getting started! Dr. Chuck Thurston is an emergency room physician with years of experience not only in medicine, but Biblical study.