Dr. Thurston looks at the tabernacle, and how it reveals a pattern of New Testament events in Prophetic Patterns in the Tabernacle Video 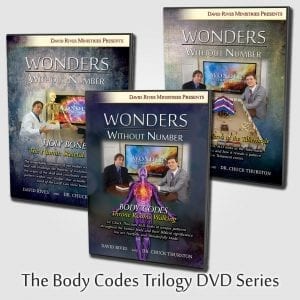 Prophetic Patterns in the Tabernacle Video

Why was the Tabernacle built in a certain fashion?

As seen on TV, these DVDs have aired on GSN – Genesis Science Network. This content was also the basis for several episodes of “Creation in the 21st Century with David Rives” on TBN. It is not the program that aired, but the official Videos on which the shows were based.

Dr. Chuck Thurston, MD looks at the Tabernacle in the Wilderness, and how it reveals a pattern of New Testament events.

We’ve all heard of the Tabernacle in the wilderness that the Israelites set up to be the dwelling place of God’s presence… But is there more to the design of the tabernacle that we haven’t considered? Why was God SO specific when giving the instructions for its design?

Could there be a pattern there since Old Testament times which would relate to the coming of our Savior in the New Testament? Learn more in Prophetic Patterns in the Tabernacle Video

What about the human body, designed to be a tabernacle, or dwelling place for the Holy Spirit? Find out as we explore the relations between the Tabernacle in the wilderness and patterns found throughout the scriptures… even found in us, as human beings.