In The David Rives Dinosaur Collection you will see many of your favorite scientists – It’s like having a front seat at the leading origins conferences.

In The David Rives Dinosaur Collection you will see many of your favorite scientists – professional scientists who have come to realize that the Biblical Record is absolutely correct. Real scientists with the information to back it up. It’s like having a front seat at the leading origins conferences.

Echoes of the Jurassic DVD 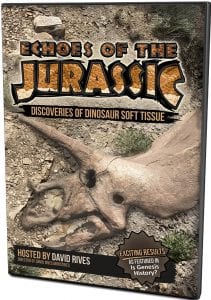 Did dinosaurs roam the earth 65 million years ago? Echoes of the Jurassic shows new discoveries with evidence for creation and Biblical accuracy of Genesis. Hosted by David Rives (Refracted Glory, Creation in the 21st Century) It is true!  In 2005, Dr. Mary Schweitzer and her research team reported one of the greatest paleontological discoveries in history. The scientific community was stunned, and many argued that it is not possible for there to still be soft and pliable tissue remaining in dinosaur bones. They claimed that it was contamination or bacterial biofilm mimicking soft tissue. However, during the past decade discoveries have continued, and the evidence clearly demonstrates that this is original dinosaur tissue. In 2012, the Creation Research Society began work on its iDINO project. It was created with the specific purpose of conducting dinosaur tissue research from a Biblical creation perspective. As part of this project, tissue and intact bone cells were discovered in a Triceratops horn. See the evidence for yourself, and understand why this is such a challenge to the evolutionary dogma.

Note from the host:
“I was so privileged to be a part of this project. The discoveries found in this DVD are critical information for literally every individual. Whether high school student, church-going couple, or secular college professor, you will learn of previously unknown scientific breakthroughs. The groundbreaking soft-tissue research has been suppressed in most schools and universities because it points to a literal, historical Genesis. It challenges evolutionary theories of biology because soft tissue could not survive for the millions of years suggested by secular paleontologists…
Did T-Rex roam the earth over 65 million years ago? Prepare to be shocked as you learn of PhD scientists finding some INCREDIBLE things inside freshly-recovered dinosaur bones.

Take the journey with me and find out for yourself, in Echoes of the Jurassic!” 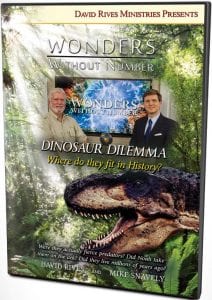 Where do they fit in History? Were they actually fierce predators? Did Noah take them on the ark? Did they live millions of years ago? Did you know that two hundred years ago no one had ever heard of a dinosaur? What are these creatures? How long ago did they live? And why did they go extinct? Join David Rives and Mike Snavely as we learn how Dinosaurs fit into Biblical History. Mike Snavely grew up in an area of South Africa that teemed with complex and diverse creatures. He learned first-hand many remarkable things about nature, and has worked for the National Parks Service in Kruger National Park. His insight into these really, really big lizards will bring a fresh, educational, and entertaining perspective to a hot topic. 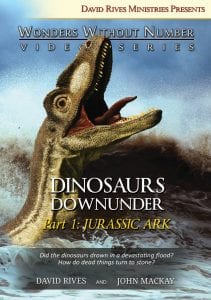 Did you know that terrible lizards are being found downunder, in Australia? How did those creatures get there? Did a big meteorite wipe them all out? Or maybe there was a flood? What is the fossil record really trying to tell us, and does it line up with what we read in our Bibles? John Mackay is a debater, lecturer and researcher from Australia who has done a tremendous amount of field work on these subjects. 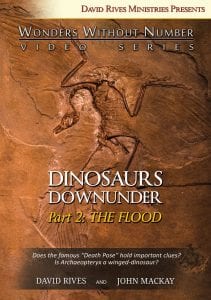 Could dinosaurs swim? Why are their fossil remains many times found with their necks and heads arched back in a spectacular “Death Pose”? What about Archaeopteryx, the supposed feathered dinosaur? John Mackay is a debater, lecturer and researcher from Australia who has done a tremendous amount of field work on these subjects. What is the fossil record really trying to tell us, and does it line up with what we read in our Bibles? 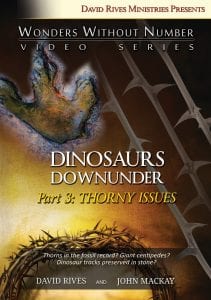 Did dinosaurs and man live at the same time? Is there scientific evidence that they died out only after sin entered into the world? What can THORNS AND THISTLES in the fossil record tell us? Weren’t they part of the curse in the Garden? What is the fossil record really trying to tell us, and does it line up with what we read in our Bibles? John Mackay is a debater, lecturer and researcher from Australia who has done a tremendous amount of field work on these subjects. 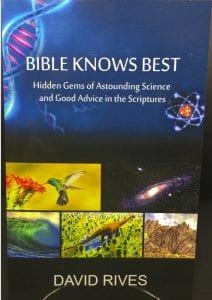 Author, lecturer, and television host David Rives takes readers through a fascinating and fast-paced examination of the cosmos, human intelligence, earth sciences, and wonders of the animal world. DISCOVER NUGGETS OF SCIENTIFIC TRUTH FOUND ALL THROUGHOUT SCRIPTURE. Did you know that the very origin of time, space, and matter can be found in the very first verse of the Bible? David Rives expertly demonstrates the fact that the Bible is an accurate record of history from beginning to end, and is also extremely accurate when revealing scientific principles that have only recently been discovered by modern science. What is DNA and what does it tell us about a Designer, God? Who used a Psalm to chart the “Paths of the Sea”? What creature travels 156,000 miles every year? Learn about the miracle system that preserves the tiny hummingbird, and discover the “stretching of the heavens” referenced in the Bible. Does the BIBLE KNOW BEST, and has it stood the test of time? The answers can be found within the pages of this inspiring book.