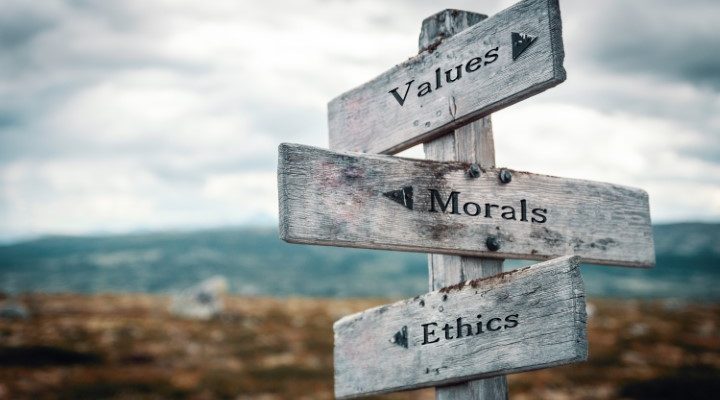 What defines your moral consciousness? Why should you believe in creation, and not evolution? I mean, scientifically speaking. Haven’t we proven that evolution is a fact?

Well, the word “evolution” can mean a lot of different things today. One way it is frequently used is to describe the supposed process by which a single-celled organism slowly, over millions of years, turned into every living thing we see today. This is probably what most people think of when they hear “evolution.”

Now, if this idea is true then everything had to have evolved at some point, including immaterial things such as human moral consciousness. But this poses a question. You see, evolution is supposedly a naturalistic process that works on material such as DNA. How does a completely naturalistic process evolve moral consciousness—something that is completely immaterial!

This question is a puzzle for many evolutionists. William Provine, an evolutionist and biology professor at Cornell University, once said that one of the implications of evolution is that “No ultimate foundations for ethics exist, no ultimate meaning in life exists, and free will is merely a human myth.”

But human experience clearly shows us that we should be held accountable for our actions. Most evolutionists would agree that if someone murders another person, he should be punished. But the question is why? If man is nothing more than another animal, how can we be held accountable? After all, no one punishes a lion for killing a gazelle or – – an eagle for snatching a trout from a stream. What makes humans so different?

Some evolutionists will argue that society defines morality. For example, as an American society we’ve decided that murder is wrong so it is wrong. But this can’t be right. Other societies, such as Nazi Germany or radical Islamic groups today, believe that murder is perfectly acceptable if it accomplishes their purpose. To be consistent with the idea that ethics are decided by a society, an evolutionist would have to admit that murder is okay for these societies, but just not for ours. But we intrinsically know that murdering millions of people in death camps or detonating bombs and killing civilians is morally wrong. Morality simply can’t be decided by what a society thinks.

A consistent evolutionist would have to admit that there is no such thing as a universal moral ethic in his ideology. And yet most evolutionists certainly would not admit to this. They are being inconsistent with their worldview.

But the creation worldview does not have this problem. The Bible, the Word of our Creator, Yashua of Nazareth, provides a foundation for morality. We were created in the image of God. We are not animals. As our Creator, only God has the right to set the rules and He holds us accountable to them. In the book of Romans we read that God has put His law in our hearts. In other words, we have moral consciousness because God’s law is in our hearts.

The Bible also explains why no one can live a perfectly moral life, and why we see death and suffering. In the book of Genesis we read that God created a perfect world but the first people, Adam and Eve, rebelled against God. They introduced sin into the world and now we all sin and fail to live up to God’s law. But Jesus Christ, our Messiah, stepped into history, living a perfect, sinless life, and died on the Cross taking the penalty for our sin upon Himself. He then rose from the dead and offers forgiveness and eternal life to all who will believe.

The evolutionary, naturalistic worldview cannot account for the existence of morality. But Creation, as we find in the Bible, explains why we have a moral conscience, why it is broken, and why we can have hope – and where we can find forgiveness.

Just one more scientific reason that you shouldn’t believe in molecules-to-man evolution. It takes a LOT of faith.

How Darwinism Corrodes Morality looks at how Darwinism has adversely affected morality in Western culture. The ideological impact of Darwinism is profound.

How Darwinism Corrodes Morality looks at how Darwinism has adversely affected morality in Western culture, not only sexual morals but also the mistreatment of minority races, the killing of the sick and diseased and the rise of the abortion movement. Key figures of the twentieth century are considered: Havelock Ellis, Margaret Sanger, Friedrich Nietzsche, Sigmund Freud, Benjamin Spock, Karl Pearson, Anders Behring Breivik and others. Darwinism, immorality, abortion and the sexual revolution. The ideological impact of Darwinism on such issues as eugenics, abortion, racism, war and social policy since Charles Darwin’s On the Origin of Species was first published in 1859 is profound. Overturning the predominately Judeo-Christian worldview of previous centuries, Darwinism has infiltrated every area of science, philosophy, art, literature, business, anthropology, social policy, governance and medicine.

We need to understand the foundational problem in order to propose ways that societal reforms can be addressed in our day— How Darwinism Corrodes Morality will help us do just that.